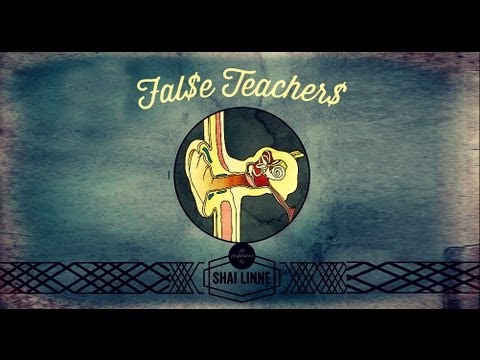 I’m just back from a refreshing and edifying time with saints at New Word Alive. New Word Alive is a family Bible conference held each year in North Wales. If you’re in the U.K.,  I can’t recommend it enough for its focus on the word of God, evangelism, and Christian fellowship. It was a joy to take part.

Of course, spending a week at a largely internet-free campground in North Wales means you’re a little out of the loop when it comes to the goings ons of the Christian world. And when it’s the world of Christian hip hop, the cultural black hole is even more pronounced. I loved the saints at New Word Alive, and the worship was wonderful, but there wasn’t much boom-bap happening.

So, I was a little surprised to see some of the internet brouhaha over shai linne’s new single, “Fal$e Teacher$.” In the single, shai takes aim at a host of prosperity gospel and word-faith teachers. It’s not the first time he (or others for that matter) has critiqued such teaching in his music. In response to the single, Bradley Knight, son of Paula White, posted an open letter to shai in defense of his mother’s ministry. Christianity Today picked up on the issue. Lisa Robinson at Parchment and Pen offered reflections based on her years inside prosperity congregations. Mark at Here I Blog added some source support for the song’s denunciations. Those were the first 4-5 entries in my quick google search. I’m sure there’s tons more opinion out there!

The back and forth has conjured the usual questions about whether private conversation should have happened first, whether public criticism and naming names is appropriate and under what circumstances, and whether Christian unity and charity ought to rule out polemics.

For my part, not that “my part” means anything, I’m rather glad shai included this single on his album. I have six reasons:

1. Reach. Unless you’re inside the prosperity gospel or word-faith  movement, you’ve probably been concerned with the reach of these teachers. They operate impressive (I mean that!) multimedia empires and export their brand of the “gospel” to the most distant corners of the globe. That media savvy and reach has made it difficult for others to stand against the rushing tide of their teaching. But Christian hip hop has a developing, media-rich, and savvy reach of its own. It’s reaching a younger generation of believers and reaching the corners of the globe. Christian hip hop may be the first medium by which orthodox voices can effectively push back against the titans of word-faith and prosperity “gospel” teaching. When Prop, Lecrae, and shai are able to stir the ire, accolades, or pushback of theologians, secular awards panels, or ministry offices of word-faith teachers, something is happening on a different scale. We may be observing Truth’s reach being extended in a helpful and hopeful way.

2. Force. Of course, what good is reach if you have no power or force? The ranging responses drawn from “Fal$e Teacher$” also suggests that Christian hip hop may be developing as a cultural force at least strong enough to prick the conscience and shape opinions. Hip hop has always featured rhetorical and creative power. Now we’re witnessing a maturing theological power. Prop’s “Precious Puritans” provoked a conversation about our heroes, race, and pastoral sensitivity. Perhaps shai’s single will awaken a fresh discussion of biblical and theological faithfulness. Perhaps the medium of hip hop will have enough rhetorical, theological, emotional, intellectual, and social force to prompt some Christians to re-evaluate the teachers to whom they listen. I pray so. I mean, when’s the last time you heard contemporary Christian music or gospel music effectively raise these issues? Yeah, me neither.

3. Urgency. I’m also thankful the Lord moved shai to pen, record and release this song because the gospel is urgent business. Getting it right is eternally urgent. Making it clear is urgent. Believing the gospel while it’s still day–urgent. These are not the kinds of issues that should be dealt with in the glacial, cold cerebral manner of academe. The gospel of Jesus Christ is the message that divides time and eternity, heaven and hell, life and death. Who can tolerate distortion and half-truth when so much is at stake? I’m glad for the driving sense of urgency that hip hop can give to some of these issues, because these issues and these teachers are affecting real people in real ways. Perhaps we pastors have been unable to create the combination of light and heat such errors deserve. Perhaps the native passion and the growing theological light of Christian hip hop can change the pace of the discussion.

4. Profile. Not one of the teachers listed in shai’s song could be called “unknown” or “low key” or otherwise “anonymous.” These are some of the most high-profile figures in the evangelical (I use the term loosely) world. Their collective public influence is massive. Their teaching, prettied up and slicked down a bit as their clout has grown, is a very public record. They have not taught these things in a corner and the proliferation of books, websites, and other resources means that a very public alternative and response needs to be given. We need a higher profile opposition to these high profile errors. I’m thankful to shai for the part he has played in doing this. I understand that some people view the first opinion as “unfortunate” at worst but hold anyone who replies guilty of a more foul offense. They tell us that confrontation should first happen privately (even as they write to publicly confront for this supposed transgression). But this inverts the Bible’s teaching, which says, “The one who states his case first seems right, until the other comes and examines him” (Prov.18:17). By silencing the cross-examination, we leave ourselves with only the first-stated case, which usually is not the correct position. It seems to me the Christian world needs to grow up a little and accept the public accountability that’s necessary to guarding the gospel and guarding God’s people.

5. Prevention. I pray this ounce of prevention really does result in a pound of cure. I pray that minds would be changed, thinking sharpened, and hearts enflamed with greater passion for Christ and greater thanksgiving for what He really does purchase for us. Every faithful pastor wants to guard the flock entrusted to his care. They want to keep the sheep feeding on the green pasture of God’s word correctly understood and applied. In this day of internet connectivity, most every pastor who takes this responsibility seriously is probably thankful for an ally like shai who uses an important medium to help protect the children of God. I know I’m thankful and I hope many are kept from the errors of men and women piercing themselves through with the love of money, deceiving and fleecing the flock to provide for their worldly lifestyles.

6. Witness. I shouldn’t have to say that false teachers harm the witness of the church, but they do. People with clear vision can see it. Take, for example, this comment from a self-described atheist over at Christianity Today:

Well, as an atheist who does watch TBN on occasion…I have to say he [shai] got it right. If you Christians care about the integrity of your religion, you’d drum out these snake oil salesmen from your midst. They’re turning Christianity into a laughingstock with no credibility at all.

Even those with no belief in God see the problem created by “gospel” hucksters. If we care about the effectiveness of the church then we must care about the reputation (1 Tim. 3) and teaching (Titus 1:9) of its leaders.

The usefulness and power of hip hop will be multiplied as we pray for and encourage the kind of courage shown in shai linne’s “Fal$e Teacher$”. There ought to be enough room in Christian hip hop for someone to stir godly controversy in behalf of the gospel and the Church. What we have to guard against is the kind of controversy between artists that overthrows the potential of the medium and the artists. As Christian hip hop matures, I pray it continues to handle the hard-hitting controversial subjects with reach, force, urgency, profile, and a pinch of prevention. The entire Church will be blessed as they do.

Scotty Smith
Our Father’s “Graciousness”
The Cardiac Health We Get in the Gospel
Loving Now More As We WILL Love Then
Kevin DeYoung
A New (Old) Blog
Life and Books and Everything: American History and the Historian’s Task with Wilfred McClay
Life and Books and Everything: What’s Going Right in the Church?
Thomas Kidd
Is the Declaration of Independence a Christian Document?
The ‘Jefferson Bible’ and a Founder’s Skepticism
What ‘Deist’ Meant to Thomas Jefferson
Melissa Kruger
Sneak Peek Interview: Lindsey Carlson’s New Book
Sneak Peek Interview: Ann Swindell
Sneak Peek Interview: Hannah Nation
LOAD MORE
Loading