That’s the haunting question the psalmist asks in light of Israel’s social deterioration. The psalmist lives in a time when the wicked under the cover of dark fire their arrows at the hearts of the righteous (11:2). It’s open season on the just.

The psalmist appears befuddled, overwhelmed with the extensive decay of society. So he asks poignantly, “what can the righteous do?” But as a person of faith, the psalmist places his hopes of righteousness beyond the reach of the wicked. He resolves:

4 The Lord is in his holy temple;
the Lord’s throne is in heaven;
his eyes see, his eyelids test the children of man.
5 The Lord tests the righteous,
but his soul hates the wicked and the one who loves violence.
6 Let him rain coals on the wicked;
fire and sulfur and a scorching wind shall be the portion of their cup.
7 For the Lord is righteous;
he loves righteous deeds;
the upright shall behold his face.

The Lord reigns from heaven. Righteousness provides the foundation of His throne. From His throne, the Lord sees and He proves the righteous. The Judge of all the earth “hates the wicked and the one who loves violence” (v. 5) and will “rain coals on the wicked” (v. 6).

To that dual vision of upholding the righteous and casting down the wicked, the faithful shout a loud “Amen!” We rejoice that righteousness will finally triumph—even if it appears it may not happen in our lifetimes.

It is in this way that the psalmist finally answers the question that forces itself forward: “what can the righteous do?” Those who believe in God cannot forgo the righteous deeds our God loves. Especially when the foundations of justice, righteousness and truth are under assault. 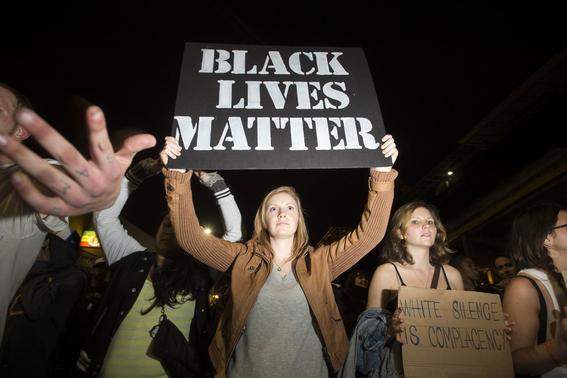 I stand with the protestors because they better demonstrate what genuine faith looks like.

They take action in the wake of the long list of women, men and children killed during interactions with law enforcement officers under uncertain, suspicious or unjust circumstances. They say to us with each step that, “Faith without works is dead.” They disprove the easy-to-believe lie that we can regard ourselves faithful Christians while remaining unmoved when we see a man left for dead in the street, on a sidewalk, shopping at Wal-Mart or playing in a park. They make us to see whether or not we’re the Priest and Levite who passes by on the other side of the Jericho road or like the Good Samaritan who felt compassion and acted.

The Bible is filled with godly persons taking their place in protest against government-sanctioned injustice. Sometimes they secretly collaborate to do good, like the two Hebrew midwives, Shiphrah and Puah, who risked their lives to save children doomed to slaughter (Exodus 1). Among those saved was a deliverer appointed by God, Moses, who would stand before Pharaoh and demand release of his enslaved countrymen. Sometimes the faithful act alone in great courage, like Esther appearing before a pagan King on behalf of her people when doing so could cost her life. Or, like Daniel or the three Hebrew boys who refuse to bow to idols and choose rather to suffer the unjust punishment of pagan power in order to keep covenant with God, that is, in order to live righteously. Or consider Paul’s appeal to Roman citizenship in protest against his mistreatment.

We are not left without biblical examples of men and women who resist injustice from governments ordained by God in order that lives might be saved. Such protest is faith in God, for none of these put their hopes in earthly officials unsympathetic to their cause. They took their stand because they believed, like the psalmist, “the Lord is righteous; He loves righteous deeds; the upright shall behold His face.”

What Are We Doing When We Protest the Protests?

I stand with the marchers because they are the ones protecting the foundations.

Some Christians oppose the marches and the activists. They have argued and continue to think that Christians should not be involved in protest. They tell us that Christians should only focus on “the gospel” and “spiritual themes.” This, they say, is most true of pastors. They are quick to say, “Ferguson is not the right case to use for justice.” But even when a plain case appears on the screen—like John Crawford shot in Wal-Mart, or Eric Garner choked to death, or Tamir Rice shot while playing—they can’t find it in themselves to say “Here’s the case!” Their failure proves their insincerity. They act as if the gospel has nothing to say to the poor, the oppressed, the marginalized and the mistreated—and that’s why their “gospel” remains a cruel delusion to those who need it in such trying times.

Some who tell us Christians have no responsibility in protest come dangerously close to assuming that because God ordains a government that the government must be right in what it does. At the very least, forgetting the indwelling sin that affects all without regard to uniform, they think God’s ordination of government ought to tip us toward believing the word of government officials. Of course, they don’t make that assumption when the things threatened are the people and things they cherish. Then government is too big, a senate hearing needs to be held, a call to arms is right, and even the formation of separatist militias makes sense to them. Such persons have lost the plot in more ways than one.

Here’s the thing: the ability to protest is among the rights guaranteed to U.S. citizens. It is framed in the U.S. Constitution by those who themselves protested against their government and came to see such protest as necessary to the resistance of tyranny. The First Amendment reads in part, “Congress shall make no law… abridging the freedom of speech, or of the press; or the right of the people peaceably to assemble, and to petition the Government for a redress of grievances.”

If you love the country, you should not miss this: the right to freely assemble and to protest lies at the foundation of our constitutional democracy. Assembling to protest is the legal way the righteous leverage change in our country. That’s why when we protest against lawful protests we are actually committing a second transgression of civil rights. Those who protest lawful protests are, in fact, the ones destroying the foundations of a democracy God has ordained and we have cherished. Lawful protestors don’t threaten us; those who silence and censor do. Every law-abiding citizen–including every law-upholding officer–should protect this right.

The unwillingness of some people to distinguish persons who riot and burn property from those who peacefully demonstrate threatens the freedoms we cherish. If we cannot honestly recognize the difference between criminal activity (looting, etc.) on the one hand and democratic appeal (legal marches) on the other, then we create a civic culture where police brutality against lawful citizens is not only possible but such brutality is also unidentifiable as injustice. If we can’t or refuse to tell the difference when we view marchers on television how do we expect law enforcement officers to do any better when they’re in the trenches? And, consequently, how do we hope to hold them accountable when they fail?

We’re kidding ourselves if we think we can remain willfully blind about injustice and hope that our law enforcement officers will see what we refuse. For they are us.

A Gift from African-American Christians

I stand with the marchers because they are the ones pursuing a just goal with a just means.

The ends do not always justify the means. A just cause can be undermined by unjust methods. For righteousness to prevail, we need both a righteous method and a righteous result.

When I watch these young people across the country lie prostrate or march energetically in protest, I’m reminded that this gift of non-violent civil disobedience is, in fact, a gift from African-American Christians to the country. The constitutional freedoms that guaranteed the right of assembly were not always guaranteed to African Americans. Slave codes and other laws restricted the assembly of African Americans to numbers you could count on one hand. When those codes were violated, all the power of law enforcement could be brought against African Americans who gathered—even to the point of whippings and killings.

The genius of the Civil Rights Movement was that it peacefully used a right once denied some citizens to prick the conscience of other citizens until justice was won. It was non-violent civil protest that changed the country without destroying the country. That method did more to change the hearts and minds of the country than any other method used in any other protest before it and has defined protests since. Civic protest succeeded so wonderfully because a preacher understood that suffering and love could be redemptive where violence could not.

Dr. King’s strategy and the courage of the many thousands who joined him gave to this country a redemptive language and method for addressing grievances. If Dr. King were alive, I feel confident we’d find him marching, proclaiming, “Hands up! Don’t shoot!” To the extent that any protestor embraces this approach, I stand with that protestor.