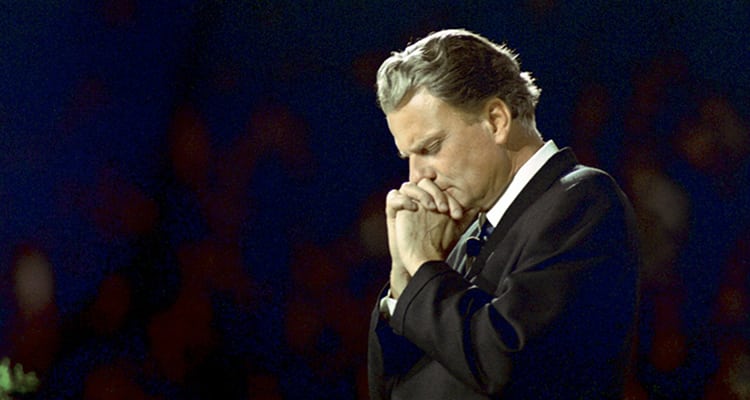 “A strangely fascinating power is exerted by those who are utterly sincere.  Such believers attract unbelievers, as with the case of David Hume, the eighteenth-century British deistic philosopher who rejected historic Christianity.  A friend once met him hurrying along a London street and asked him where he was going.  Hume replied that he was going to hear George Whitefield preach.  ‘But surely,’ his friend asked in astonishment, ‘you don’t believe what Whitefield preaches, do you?’  ‘No, I don’t,’ answered Hume, ‘but he does.’

I am convinced that in our day simple sincerity has not lost any of its power to appeal or to impress.  It was in 1954 that Billy Graham first hit the headlines in Britain, with his Greater London Crusade.  Approximately 12,000 people came to the Haringay Arena every night for three months.  Most nights I was there myself, and as I looked round that vast crowd, I could not help comparing it with our half-empty churches.  ‘Why do these people come to listen to Billy Graham,’ I asked myself, ‘when they don’t come to listen to us?’  Now I am sure that many answers could have been justly given to that question.  But the answer I kept giving myself was this: ‘There is an incontrovertible sincerity about that young American evangelist.  Even his fiercest critics all concede that he is sincere.  I really believe he is the first transparently sincere Christian preacher many of these people have ever heard.’  Today, twenty-five years later, I have found no reason to change my mind.”

Kevin DeYoung
A New (Old) Blog
Life and Books and Everything: American History and the Historian’s Task with Wilfred McClay
Life and Books and Everything: What’s Going Right in the Church?
Scotty Smith
When Jesus Has to Make Us Lie Down
Taking Jesus More Seriously Than Other People’s Sins
Perpetual Invitation, Spirit Libation, Grace Hydration
Trevin Wax
Don’t Let Your Wrath Make You a Wraith
Ministry Is Tough: When Self-Care Becomes Self-Absorption
Ivan Provorov and the Pressure to Punish LGBT+ Dissent
Erik Raymond
Do Affections Provide Assurance?
A New Resource on an Old Confession
Why Our Church Cancelled Christmas Eve Service
LOAD MORE
Loading