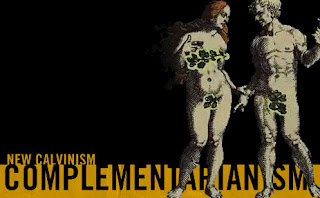 A friend of mine pointed me to a fascinating, and I think sincerely inquistive, blog post by The Common Loon, called “Is There a Calvinist-Complementarian Connection?” Here’s the gist:

As an outside observer of the movement, I’ve noticed that in addition to Reformed soteriology, one of the key doctrinal distinctives for New Calvinists is complementarianism, the view that male leadership in the church and home is a Biblical imperative. It’s no coincidence that influential Reformed/Calvinist (I’m using these terms interchangeably here) leaders like John Piper, Al Mohler and Mark Driscoll are among evangelicalism’s most vocal opponents of women’s ordination. As a staunch egalitarian, I believe Scripture teaches that God gives the gifts of preaching, teaching and church leadership to both men and women, which puts me squarely at odds with the young, restless, Reformed camp…

If I were capable of passing through the narrow doctrinal checkpoint affirming both TULIP and complementarian gender roles, I would find a community of New Calvinists refreshingly open to a range of positions on baptism, miraculous gifts, the Lord’s Supper and eschatology. This explains why a charismatic like C.J. Mahaney can partner with a cessasionist like John MacArthur at the distinctly Reformed Together for the Gospel (T4G) conference, not to mention fellow conference conveners Ligon Duncan, a paedo-baptist (one who practices infant baptism), and Mark Dever, a credo-baptist (believer’s baptism). As someone who welcomes evangelical collaboration across denominational lines, I am encouraged by these expressions of unity amid theological diversity.

In light of such ecumenism, it’s perplexing to consider why egalitarians are not also welcomed to the New Calvinist table. Complementarianism may not be at the forefront of New Calvinist identity, but it nonetheless serves as a distinct theological boundary not to be crossed.

The Loon raises a number of questions: “Why is opposition to the ordination of women a non-negotiable for New Calvinists? Why does one’s persuasion on gender roles carry more weight than one’s view of the sacraments, spiritual gifts or the millenium? What exactly is the relationship between Calvinism and complementarianism? Is there something about Reformed theology that is inherently complementarian or is the Calvinist-complementarian connection merely a feature of this particular neo-Puritan stream? Put another way: Is it possible to be a Reformed egalitarian?”

This is a tricky issue for me. For starters, I belong to a denomination that strongly supports the ordination of women to all the offices. Because of a series of “conscience clauses” in our Book of Church Order, I cannot be pressured to support the ordination of women. I am free to preach complementarian sermons and have a church that embraces complementarian principles. But I have to work with egalitarians all the time. If I didn’t, I would have hardly anyone else to work with in my denomination! Almost all the pastors I know in my Classis are egalitarians. Some of them are evangelicals with fruitful ministries.

Moreover, my church is not entirely complementarian. Most members are, but some are not. I disagree with them and they with me. But I still respect them. A few are strongly Reformed and egalitarian. They know where I stand and that the church staff and elder board embrace complementarian principles. So I make no apologies for being complementarian, but I am careful (I hope) not to demonize those who disagree. Some egalitarians are just knee-jerk following the culture, but others have studied the scriptures and are convinced that the Bible allows for and encourages women in every kind of ministry.

Back to the Loon’s questions. I think you can be a Calvinist and an egalitarian. My denomination–the one I grew up in and have always been a part of–strongly supports egalitarianism. This is very problematic to me. I can understand why some would leave an egalitarian denomination, but I don’t think egalitarianism necessitates that one must leave. For the time being, I am content to work with, through, and in my denomination, where both views are at the table (though my view is usually put at a card table somewhere in the basement far away from the corridors of power).

But (you knew there was a “but” coming) I am glad that the network of “New Calvinist” organizations and conferences have made complementarianism a plank in their platform. I can live in a church environment without this doctrinal boundary, but I think it would be better to have it.

Here are a few reasons why (in no particular order and more or less off the top of my head):

1. Historically, opening the door to egalitarianism in one generation leads to bigger errors in the next. I know slopes aren’t always slippery, but this one seems to be. Once your hermeneutic allows for egalitarianism, it becomes hard to stand firm on homosexuality. I’m not saying that all egalitarians believe homosexuality is acceptable, only that blurring gender roles and overstating the implications of Galatians 3:28 has often slid, over time, into an acceptance of sexual immorality.

2. The role of men and women is a huge issue for our day. Our millennial views matter, but in terms of ministering in and to the culture, where we stand in gender issues matters more. There is so much confusion on manhood and womanhood, that wherever we can speak clearly and with one voice that’s a good thing.

3. Complementarianism tends to signify a number of other important convictions. I don’t know any complementarians who don’t also affirm inerrancy, penal substitution, and eternal punishment (I’m not counting Catholics because though they don’t ordain women, the reasoning has more to do with their view of the priesthood than a complementarian theology of manhood and womanhood). In other words, if someone is a Calvinist and a complementarian I can generally assume a lot about their theology. These are not the two most important issues of the faith, but they are two issues that if embraced in our day, almost always include a lot of other important theological beliefs.

Egalitarians can also believe in the sort of core doctrines listed above, but it is far less automatic. For example, the Common Loon mentions several Calvinist/Egalitarian academics: Roger Nicole, Nicholas Wolterstorrf, John Webster, Mark Husbands, Todd Billings, Bruce McCormack, Richard Mouw, Bill Dyrness, Laura Miguelez, and Donald Bloesch. With the exception of Nicole, how many of these scholars would embrace inerrancy? Some perhaps, but I bet most wouldn’t. This doesn’t mean they aren’t worth listening to, but it does suggest that the Calvinist/Egalitarian package is different from the Calvinist/Compelementarian package in more ways than one.

4. Practically, it is very difficult for groups and organizations and movements to make both complementarians and egalitarians happy. If a new movement tried to embrace both views, how would this work? Would women be asked to be part of the leadership team? Would women preach to pastors at their conferences? This would not fly with most complementarians. And yet many egalitarians would see this as a matter of justice (they do in my denomination). Someone is bound to be upset. It is simpler and better for the long-term peace of an organization to take a stand on this issue. Cross-denominational movements can allow for different views of baptism, because they don’t ever have to baptize anyone. But such movements will have to make decisions on leadership structures and speaking requests. So going one way or the other on the gender issue becomes a practical necessity.