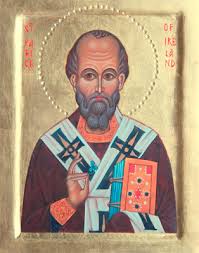 A day late I realize, but I didn’t think about St. Patrick’s Day until my son asked me yesterday who Patrick was. This question forced me to pull down from the shelf one of my favorite history books. It’s not a page turner, but I learned something on every page. Actually, I learned something with almost every paragraph. The book is The Barbarian Conversion: From Paganism to Christianity by Richard Fletcher. For a readable, scholarly treatment on the long, slow, amazing transition in Europe from paganism to Christianity there is simply no better book.

So what does Fletcher say about Patrick?

Well, first you need to know what Patrick did not do.

He did not expel snakes from Ireland: the snakelessness of Ireland had been noted by the Roman geographer Solinus in the third century. He did not compose that wonderful hymn known as ‘Saint Patrick’s Breastplate’: its language postdates him by about three centuries. He did not drive a chariot three times over his sister Lupait to punish her unchastity. . . . He did not use the leaves of the shamrock to illustrate the Persons of the Trinity for his converts: true, he might have done; but it is not until the seventeenth century that we are told that he did. (82)

Determining fact from fiction for Patrick is difficult, in part because his writings were not always passed along reliably. More important, Patrick wrote in particularly poor Latin. He received little education and did not handle Latin well. Fletcher says his Latin is “simple, awkward, laborious, sometimes ambiguous, occasionally unintelligible” (83). This makes it hard to know too much for certain.

But here’s what most scholars agree on: Patrick–whose adult life falls in the fifth century–was actually British, not Irish. He was born into a Christian family with priests and deacons for relatives, but by his own admission, he was not a good Christian growing up. As a teenager he was carried by Irish raiders into slavery in Ireland. His faith deepened during this six year ordeal. Upon escaping Ireland he went back home to Britain. While with his family he received a dream in which God called him to go back to Ireland to convert the Irish pagans to Christianity.

In his Confessio Patrick writes movingly about his burden to evangelize the Irish. He explicitly links his vocation to the commands of Scripture. Biblical allusions like “the nations will come to you from the ends of the earth” and “I have put you as a light among the nations” and “I shall make you fishers of men” flow from his pen. Seeing his life’s work through the lens of Matthew 28 and Acts 1, Patrick prayed that God would “never allow me to be separated from His people whom He has won in the end of the earth.” For Patrick, the ends of the earth was Ireland.

Over decades, Patrick made “many thousands of converts.” He evangelized in cities and in the countryside. He encouraged the monastic way of life, ordained priests, and planted churches.

Patrick, says Fletcher, “was soaked in the Bible.” This was commendable, but not completely unusual. What was new was Patrick’s embrace of the missionary mandate to lead the nations to Christ.

Patrick’s originality was that no one within western Christendom had thought such thoughts as these before, had ever previously been possessed by such convictions. As far as our evidence goes, he was the first person in Christian history to take the scriptural injunctions literally; to grasp that teaching all nations meant teaching even barbarians who lived beyond the border of the frontiers of the Roman Empire. (86)

Sounds like a man deserving of his own holiday. It’s too bad today the forefather of western missions is chiefly celebrated by drinking beer and dreaming of  leprechauns. We don’t know much for certain about Patrick. But what we know of his ambition and ministry should be enough to make all of us a little green with envy.

Thomas Kidd
Is the Declaration of Independence a Christian Document?
The ‘Jefferson Bible’ and a Founder’s Skepticism
What ‘Deist’ Meant to Thomas Jefferson
Scotty Smith
Jesus, the Vulnerable, and a Large Millstone
7 Awesome Groups-of-3 to Pray, Love, and Live
Living Between Glorious Bookends
Justin Taylor
Charles Spurgeon’s Battle with Depression
An Interview with Paul on What’s Wrong with Us
Why John Was Not a Baptist: The 7 Irreconcilable Differences Between John Bunyan and the Baptists
Erik Raymond
When the Going Gets Tough
Recent Reads March 2022
It’s Not as Bad as You Think
LOAD MORE
Loading