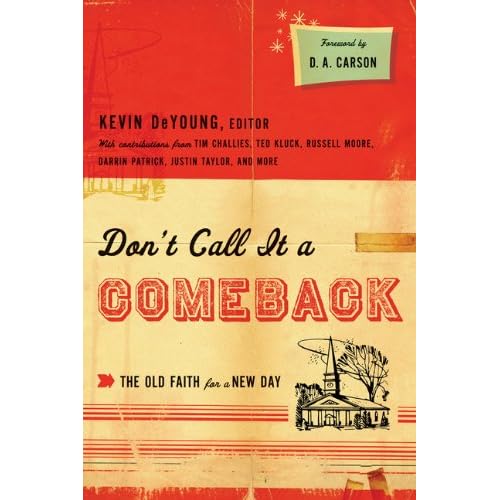 This won’t be last time I try to put in a good word for Don’t Call it a Comeback: The Old Faith for a New Day. I’ll have more to say about the book over the next two months. But just to whet your appetite a little I thought I include a couple paragraphs from D.A. Carson’s Foreword.

But it would be a huge mistake to imagine for one moment that everything depends on the sixty-year-olds. God is raising up a remarkable generation of twenty-somethings, thirty-somethings, and forty-somethings who are articulate, eager to be faithful to the Lord Jesus and his gospel, hungry to teach the Bible rightly and with unction, eager to use their minds while loving with their whole being, and struggling both to believe and to do the truth. The contributors to this book represent only a small fraction of them.

The book, which features chapters from Collin Hansen, Justin Taylor, Tim Challies, Darrin Patrick, Thabiti Anyabwile, Tullian Tchividjian, and many others will be released January 31, 2011.