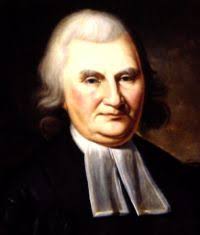 The Federalist Papers is a classic work that too few Americans have ever heard of, let alone have read. Written by James Madison, Alexander Hamilton, and John Jay, The Federalist Papers were an important series of articles promoting the ratification of the United States Constitution. Today marks the anniversary (February 6, 1788) of one of the most well known articles, Federalist 51, which  was written by Madison to explain the necessity of checks and balances between the different branches and departments of government.

James Madison studied at Princeton under the evangelical Presbyterian minister John Witherspoon. How much of Madison’s political theory came from Witherspoon is difficult to prove, but he certainly received a strong dose of Reformed anthropology from his mentor. The Scottish parson more than once remarked rhetorically “What is the history of the world but the history of human guilt?” In lectures that Madison would have sat through, Witherspoon argued that we “certainly discover in mankind” a “disposition without restraint to commit errors of a gross nature.” And in his famous sermon leading up to independence in 1776 Witherspoon observed, “Nothing can be more absolutely necessary to true religion than a clear and full conviction of the sinfulness of our nature and state.”

Whether directly from Witherspoon or not, this understanding of the human condition was a bedrock conviction for founders like Madison. Thus Federalist 51:

But the great security against a gradual concentration of the several powers in the same department, consists in giving to those who administer each department the necessary constitutional means and personal motives to resist encroachments of the others. The provision for defense must in this, as in all other cases, be made commensurate to the danger of attach. Ambition must be made to counteract ambition. The interest of man must be connected with the constitutional right of the place.

In other words, the best government is the one designed to check its own inherent tendencies to tyranny, just as a prudent political philosophy embraces the realities of our fallen condition and plans accordingly.

Erik Raymond
How Can Pastors Prevent Burnout?
He Is Not Ashamed
How to Get More Out of Church
Ray Ortlund
Everything just so
The blessing we dread
The peace of Christ
Scotty Smith
It’s Good to Ache, Crave, Yearn for This
Little “a” Advents Between Jesus’ 2 Big Advents
Made for Wonder, Prone to Wander
Melissa Kruger
Sneak Peek Interview: Megan Hill’s New Children’s Book
Sneak Peek Interview: Wendy Alsup
Sneak Peek Interview: Trillia Newbell
LOAD MORE
Loading