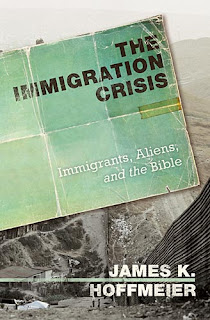 His latest book, published by Crossway, addresses the intersection of an ancient issue and a contemporary debate: The Immigration Crisis: Immigrants, Aliens, and the Bible.

Professor Hoffmeier forms a definition of aliens in Israelite society by combining his knowledge of the biblical, archaeological, and sociological evidence. He then uses this framework to explore the current debate on the status of illegal immigrants in the U.S.

Here’s a brief interview we did via email:

I imagine some people will see an American OT scholar writing a book on immigration and conclude that this is an ivory-tower, academic exercise. What is your personal experience with these issues?

I have followed with interest the public debate about immigration policy and the status of illegal immigrants. I am especially intrigued by how the Bible has been used, both by those wanting to give amnesty to illegal aliens and those who oppose it. This motivated me to investigate carefully what the Bible had to say about foreigners and aliens.

Then, too, I lived as an alien in Egypt growing up, and as a teenager, my family and I had to flee Egypt because of the 1967 war. We lived for nearly 2 months in tents on a mountain camp in Cyprus. Then for 8 years I was a graduate student in Canada. So I know what it is to be the “stranger” in a foreign land and to live as a refugee for a period. By the way, my wife is a Chinese American, the granddaughter of immigrants from China. So I am not insensitive to plight of immigrants in a foreign land. All of these factors figure into my writing The Immigration Crisis: Immigrants, Aliens, and the Bible.

I know this is a massive question, but what are some guidelines you use to take the laws from the Torah and apply them to our very different context today?

Direct application of OT laws is not easy, nor even desirable in a secular society. Christians are not under the OT law as were members of the old covenant community, but as Paul reminds us regarding the events recorded in the OT: “Now these things happened to them as an example, but they were written down for our instruction” (1 Cor. 10:11). Minimally one can look for the theological or moral principles behind they laws, and then apply them through the lens of NT doctrine.

Does the OT operate with similar distinctions that we have today between documented aliens and illegal immigrants?

What I learned in my study is that there are three relevant terms used in Hebrew (ger, zar, nekhar). Different English translations render the words differently. The TNIV and NLT render them all as “foreigner.” That is misleading and incorrect.

Zar and nekhar indeed refer to foreigners or visitors, people passing through a foreign land.

Ger or the verb gwr, which together occur more than 160 times in the OT, refer to foreign residents who live in another land with the permission of a host. A good example of this is found in Genesis when Joseph asks permission of pharaoh for his family to move to Egypt (Gen. 45:16-18). When they arrived, the brothers asked pharaoh if they could sojourn in the land (Gen. 47:1-4), and Pharaoh allotted them a section of the land of Goshen or Rameses (Gen. 47:5-7).

The law is clear that ger is not to be oppressed, but to receive equal justice, and have access to the social support system of ancient Israel. And there was a provision for religious inclusion, but they were also obligated to live in accordance with the laws just like the Israelites.

The Law does not, however, extend to the zar and nekhar such benefits and services. From this I conclude that ger was viewed as a legal alien.

The mistake of some well-meaning Christians is to apply the biblical laws for the ger to illegal aliens in American even though they do not fit the biblical legal and social definition.

It seems to me that in the public square those who are using the Bible in the immigration debate assume that the Bible endorses the idea of providing sanctuary for illegal aliens. Do you agree?

The OT Law is very clear about the practice of sanctuary or accessing the cities of refuge. The former was for those living in proximity to the Tabernacle or Temple, while the city of refuge were scattered throughout Israel for easier access.

So when American cities offer their cities as sanctuary from federal law, or when churches offer their facilities as a refuge for illegal immigrants who have been tried and order deported, they are neither following the letter or spirit of the OT law.

A recent example of this was the case of Elvira Arellano, a woman who had been ordered deported by a judge because of her undocumented status. She was given sanctuary in a United Methodist Church in Chicago for more than a year. In my view, such a practice neither follows the letter or the spirit of the biblical law regarding sanctuary.

I know that pastors are wrestling with what to do about people in their church whom they know are illegal immigrants. How would you counsel them to think through what to do from a biblical perspective?

Obviously Christian leaders need to balance respecting our laws, as Romans 13 reminds us, while showing mercy and compassion. I would encourage pastors to help legal aliens, and there are plenty who need help.

For those who are illegal, churches can help them make sure their rights are protected. A church, for example, may help pay lawyer’s fees to make sure the illegal immigrant gets a fair hearing.

A church I was involved with in the past did this for a family who was about to lose their legal status in America. With the legal advice received and the church’s sponsorship, the immigration status of this family was changed and they now legally reside in Illinois.

So one can assist the undocumented alien without breaking the law.

Here are a few blurbs for the book:

“Read this book if you want to throw light on the subject of immigration and not merely more heat. Dr. Hoffmeier’s biblical exegesis gives us valuable perspective on national borders, guest workers, the difference between documented aliens and foreigners in Old Testament times, and many other matters.”

“Doubtless some will question this or that detail of his reading of Scripture, but Hoffmeier’s book is a very healthy antidote to the merely sentimental readings that dominate much Christian thought on this complex and challenging issue.”
D. A. Carson, Research Professor of New Testament, Trinity Evangelical Divinity School

“Hoffmeier has produced an authoritative work on what the Bible does and does not say about immigration. He allows the Bible to speak for itself within its cultural context without reading modern politics into the text. While his knowledge of the biblical text and the greater ancient Near East sets the groundwork for an accurate hermeneutical approach, his sensitivity to the issues provides a road map for the church to stay true to its biblical roots while serving its calling to be a light to the nations.”
Steven M. Ortiz, Associate Professor of Archaeology and Biblical Backgrounds, Southwestern Baptist Theological Seminary

“I come from a troubled nation from which hundreds of thousands of people have emigrated to western nations—some legally and some illegally. Many have done so because of genuine pain, danger, or need they have experienced in Sri Lanka. I have always discouraged people from using illegal means to do this and often preached about this in Sri Lanka. I resonate fully with the dual biblical emphasis presented in this book of caring for the alien and of submitting to the laws of the land.”
Ajith Fernando, National Director, Youth for Christ, Sri Lanka

You can browse the book online and read chapter 1 as a PDF.

Scotty Smith
Three Precious “I’s” and One “You”
Let’s Always Be Thanking Jesus
Clinging or Resting?
Trevin Wax
Spiritual COVID and Losing Your Taste for God
3 Simple Ways to Flatten Your Neighbor
Why Roe v. Wade May Not Make It to 50
Thomas Kidd
Evangelical Worship: From War to Mosaic?
What the Lord’s “Imminent” Return Means
Carl Trueman and the Evangelical Mind
Erik Raymond
In What Sense is Jesus a Nazarene?
Your Pastor Is Probably Discouraged
You’re Never “Just” A Church Member
LOAD MORE
Loading