TGCvocations is a weekly column that asks practitioners about their work. Interviews are edited and condensed.

Robert Bigley enjoys a multifaceted career as a performer, administrator, and educator. He is currently executive director of the Trust Performing Arts Center and director of choral activities at Lancaster Bible College. As an actor and singer, Bigley has performed with several theater companies and choirs and has appeared in both television and radio ads. He holds degrees from the Eastman School of Music, the University of Washington, and the University of Miami. Bigley lives in Lancaster City, Pennsylvania, with his wife, Kendra, and their three children. 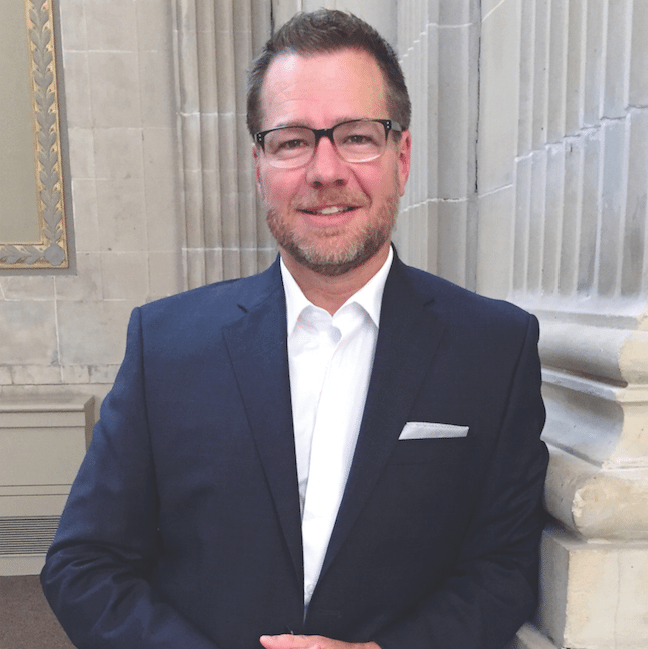 My job is to know great music, to cultivate the arts in Lancaster City, and to elevate our humanity and encourage excellence among local artists. As the director of a performing arts center that serves as a venue for music, theater, and dance, I plan the season, cast the institutional vision, oversee the operations and personnel of the center, and serve as the ambassador of the organization to the community-at-large.

In church we talk a lot about what it means to be human in the bad ways. While it’s true that we’re sinful and need a Savior, it’s also true that we’re his handiwork and created in his image. Everything that’s good in us is an expression of him. It’s important, therefore, for us to express who we are as a reflection of him. The arts is one of the best potential expressions of that, of what it means to be made in God’s image and be human in the good ways.

It’s fair to say artists often feel things more deeply than many other folks. This is what allows us to be creative. But it’s also our Achilles’ heel. A recent study by an arts organization revealed some harrowing statistics about our industry. The most sobering was that the rate of attempted suicide among performers was more than double than that of the rest of the population. Low wages, job uncertainty, sexual confusion, poor sleep habits, and a proliferation of drugs and alcohol combined with an artistic temperament can be a devastating equation. This is my mission field, and I’m humbled when I have the opportunity to offer the hope of Christ to my fellow artists.

There are several performance venues in Lancaster––two right across the street from us­­–– so we’re often competing for the same audience. Knowing that God has handpicked whoever shows up to ours gives me the freedom to partner with our competitors, defer to them, and even promote their shows. People who would normally see me as a rival have become my friends and allies. Assurance of God’s sovereignty lets me relax, be in my community, and do good work.

Carey Anne Bustard is the intern for The Gospel Coalition’s Every Square Inch. She is currently a senior at The King’s College, studying media, culture, and the arts––with a minor in theology. She is originally from Lancaster, Pennsylvania. She is passionate about people’s stories, the Upper West Side of Manhattan, and drinking coffee. You can follow her on Twitter.