At the end of another year, we give thanks for how God has continued to use The Gospel Coalition to help strengthen pastors and Christians around the world, renewing the contemporary church in the ancient gospel of Jesus Christ.

We rejoice that in 2018, TGC’s online resources, events, publications, international outreach, and women’s training network, among other initiatives, have helped equip countless thousands of Christians to grow in faithfulness to the Lord Jesus and his transforming gospel.

Below are some highlights for how God has used TGC in 2018, as well as a call for you to join us as we continue to produce gospel-centered ministry for the 21st-century church, particularly for the growing gospel movements beyond North America.

Many Christians and church leaders around the world are hungry for resources to help them better preach and teach the gospel, distinguish it from false gospels, and apply it to all aspects of life. This hunger is seen in the rapid growth of The Gospel Coalition network beyond North America.

To help alleviate the global hunger for gospel-centered resources, TGC has also launched initiatives like: 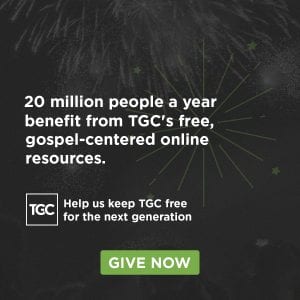 All of this content for the global church—just like hundreds of articles, videos, podcasts, courses, and other resources published annually on TGC.org—is given away for free, providing robust resources to believers who might not have access to formal theological training.

We want to keep these resources free, easy to access, and produced at the highest standards of quality. In order to do this, TGC relies on the generosity of supporters like you. As I note in the video below, everything we do depends on the generous gifts of God’s people around the world.

If you have benefited from TGC, would you consider making a year-end gift to bless the many thousands of brothers and sisters across the world who are hungry for gospel-centered resources?

Thank you for your generous support, and may God grant you and your loved ones a blessed Advent season.