How long does it take to fall completely in love with someone? How much time must pass to have your heart strings tied so closely together you feel each other’s pain? How long must someone endure great difficulty to have been considered faithful, to hear “Well done, good and faithful servant”?

Two weeks ago today, my little boy Ethan Benaiah was born, surprising many with his arrival. His name is a combination of Hebrew names, meaning Endurer Built by God. From the day the anatomy ultrasound revealed that his life would be faced with many obstacles, we determined to name him with a purpose to fight and endure. Benaiah was one of David’s mighty men who was a valiant warrior. Ethan was one of the wisest men of Israel who wrote Psalm 89, wisely boasting in the strength of God to help him endure.

Benaiah was one of David’s mighty men who was a valiant warrior. Ethan was one of the wisest men of Israel.

Our Ethan was born with a mountain of impossibility standing before him. He was born seven weeks early with a significant and rare combination of heart defects, genetic uncertainties, possible brain abnormalities, and a very early rupture of membranes (his water broke at 25 weeks gestation). He needed to survive in the womb as close to 39 weeks as possible to grow strong enough lungs to help his weak heart. Because of the pre-term water break, my wife had to live in the hospital for weeks, both to avoid serious infection and to give the little guy as much time as possible to grow to overcome potential problems and be as strong as possible for surgical intervention. 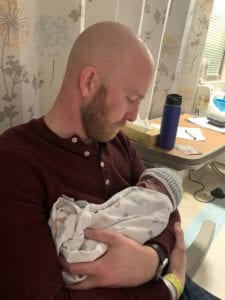 Our little guy surprised us on January 29, weighing in almost a pound more than that morning’s ultrasound estimated. Doctors marveled at how strong his lungs were. They quickly got to work placing him on life-saving machines and medications, but they needed much less than expected. Our strong, enduring boy was fighting! He might have a chance to live!

Hope for a Future

Immediately doctors gave us hope that he may have a life after all. He was just barely big enough for a new procedure that was much less invasive for such a premature baby and would give him time to strengthen until he was ready for more major surgery. The plan was going well. Ethan was growing. The medical staff continued to be amazed at his strength, noting that so many kids have it much worse. He had a few challenges, but those could be addressed with a couple of tweaks in medication and another small procedure on his heart.

We went into that procedure with hope that he would soon be breathing free and would get to meet his brothers and sisters. In the operating room we said our prayers, for the staff to work with excellent skill and for Ethan to respond well to their work. He was so peaceful and content as we laid him on that table, passing his life into the hands of our new friends.

And that would be the last time we’d see him happy. The morning dragged on longer than expected. We waited for him to be brought back to us with a good report. Instead we received a call that there were complications and he needed to be rushed to another operating room to open his chest and fix a tear in one of his heart valves. They rushed a world expert in valve repair to the room, who was able to successfully fix the tear, but too much damage had been done. They couldn’t stop the bleeding in his heart.

Hours passed with only notifications that they were trying their best to save him. But the more time went on, the more that gut-wrenching feeling overtook our bodies, until we were called to a conference room to meet with the doctors. We knew what was coming.

His Battle Was Done

With heads hanging low and tears in their eyes, the best doctors in the world told us that our Ethan was not going to survive. His battle was done. He had no more trials to endure. They had kept him alive long enough for us to go see him and hold him until he took his last breath.

We were called to a conference room to meet with the doctors. We knew what was coming.

He lived 11 days. He was the most beautiful little boy. Our hearts were knit together closer than you can imagine in those 11 days in the ICU. In 11 days he captured the hearts of dozens of doctors and nurses. In his 11 days he showed us the power, the mercy, the sweet comforts of Jesus, in ways we and those medical professionals have never seen.

In 11 days he made the gospel more clear in his life, death, and (we hope soon) coming resurrection than we have ever known. 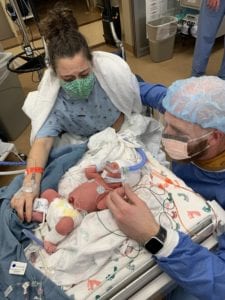 He gave us daily opportunities to point others to hope in Jesus. God tells us to be thankful in all circumstances (1 Thess. 5:18), and we are incredibly grateful to God for 11 days with this special boy.

Sadly, in God’s severe providence, Ethan did not have a heart to survive in this world. The curse of this world, due to the sin of Adam and every one of his offspring, made this world too harsh for our tiny boy.

We are a society duped into believing that physical health is the greatest story being told. We will spend billions of dollars to extend and preserve these broken physical lives. But there is a greater story being told, and Ethan helped make that story more captivating to us.

Ethan’s heart wasn’t just a problem to be overcome but a story to tell, reminding us all that we all have broken hearts that are not fit to live in Christ’s new creation. We are all born with sin-sick hearts (Jer. 17:9). We are all on life support in this world, living on respirators to keep our blood-oxygen-saturation levels high—but at any moment God could pull the plug, and every one of us would gasp for spiritual air. 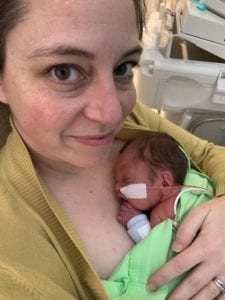 Don’t pity Ethan for only having 11 days to live; pity those who don’t have eyes to see their spiritual congenital heart defect. They don’t know that there is more than a palliative treatment. There is a miraculous heart transplant, freely available for them in Christ.

Jesus was born as the only human without this spiritual heart defect. Yet on the cross he took upon himself the death that results from our sick hearts. He took our defect and gives his perfect heart to all who trust him, so they can spread fresh spiritual oxygen to a new body that will live forever in a new creation. Without a spiritual heart transplant, nobody will enter his kingdom. Let Ethan’s story be your call to receive a new heart, to endure the rest of your life until you breathe fresh air in Christ’s heavenly paradise. Ethan is now in the presence of Jesus awaiting his resurrection with a physical heart that will never fail him again. Today God is offering you the same promise in Christ.

Eleven days seem like a blink of an eye compared to the 95 years Ethan’s great grandpa, Bob, has lived. But a long life is an even shorter blink compared to eternity in the new creation. Ethan’s 11 days were not wasted. Our family is deeply wounded, but the death and resurrection of Jesus guarantees that at any moment those wounds will be made completely whole, when he returns and calls us home.

Don’t waste another moment in this life clinging to anything that will pass away with this old creation. You may only have 11 days left. Use every single one of them (and any more he mercifully gives you) to run hard to Jesus, and to bring as many with you as possible.

A version of this article appeared at the Redemption City Church website.

Adam Pohlman and his wife have six kids (five at home and one with Jesus). He is an MDiv graduate of Bethlehem College and Seminary (2017) and joyfully shepherds a flock of Christ at Redemption City Church.